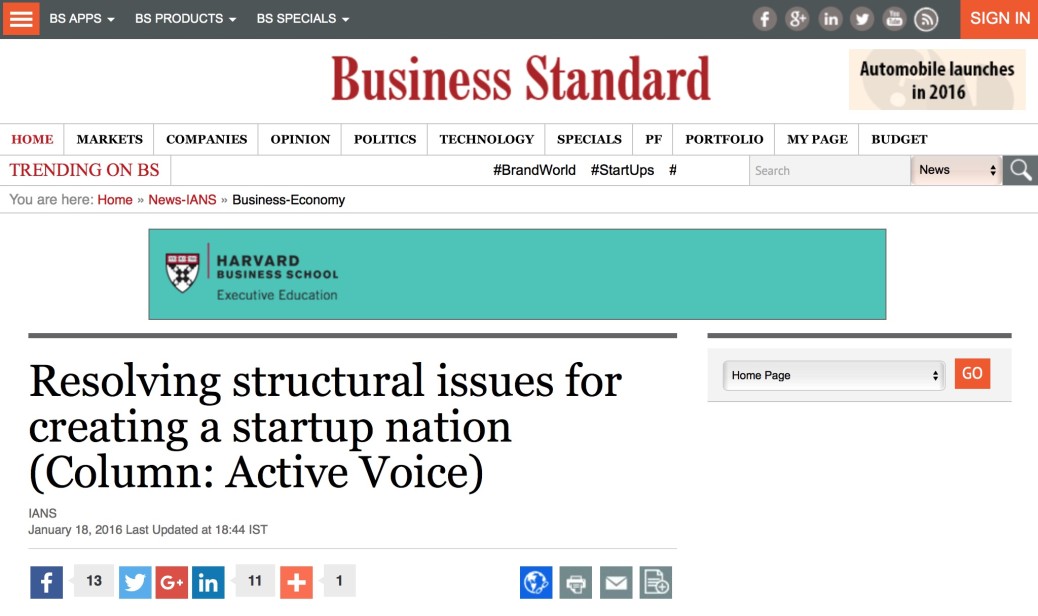 The recent congregation of investors, policymakers and entrepreneurs under the broad theme of Startup India Standup India is a good beginning.

The government announced several significant steps at this recent event in Vigyan Bhawan. Some of these included easier compliance regime with self-certification, plans of creating a start-up hub, easy registration and faster exit for startups, public funding through a fund of funds and the like. While these are welcome announcements and steps towards bettering the existing situation, in the long-term the focus should be on solving deeper structural challenges.

These include resolving the issues of education and skilling that are necessary for enabling a creative population. Human capital cannot be harnessed so long as formal institutions of learning do not support the creative ability. In this, the government has done well to show intention for establishing incubators and start-up centres but what is also required is an education in this direction among the young. This is where the creation of a startup nation will require direction at the initial educational level for people who undergo formal education or even skilling.

The second set deals with the issues around labour laws. While the government has looked to rationalise the laws for start-ups as well as offered a three-year window, equally required is rationalising the archaic inflexible labour laws that prevent startup’s to make a difference that they actually can post this period. The crux is to find legal mechanisms in which concerns of both employers and employees rights are resolved in an amiable manner. How one creates a balanced functioning system is important from the government’s point of view.

Another pertinent issue is in the context of capital. The government has planned to set up a fund of funds with an annual corpus of Rs.2,500 Crore per annum over the next four years. Again, this is a positive step but the fundamental issue is not to do with access to capital with many investors looking to Indian markets but with the quality of ideas that form the enterprises of tomorrow. The government role should be a focus on increasing how many people look at solving tomorrow’s problems and how they can apply their learning to solve these rather than just providing people with money. More than money, knowledge, skills, and application of ideas as well as the scale is what is required. Most Indian startups still look to solve India’s problems rather than global problems; this is where scale is necessary and the government should encourage companies to look at scaling up.

Lastly, another major factor inhibiting the dream of a startup nation has to do with social context and the mindset in our society. The unfulfilled dream for having a government employee (in most cases a bureaucrat) as a son-in-law/daughter-in-law is replaced by the dream of an IT professional with a well-paying job. Till the time parents and the broader society will be forthcoming in letting youngsters take up entrepreneurship as a career option, the dream of a startup nation will remain just that. These mental models and expectations show what we drive the society towards and what we value as a society.

What will happen in the country in the coming five years in the context of startups is best left to posterity. Will there be a successful startup creation ecosystem, only time can tell. While the proposals have been nothing short of revolutionary from the side of the government these structural issues mentioned above are important to be resolved for truly creating a startup nation.

Published in Business Standard on January 18, 2016. To know more