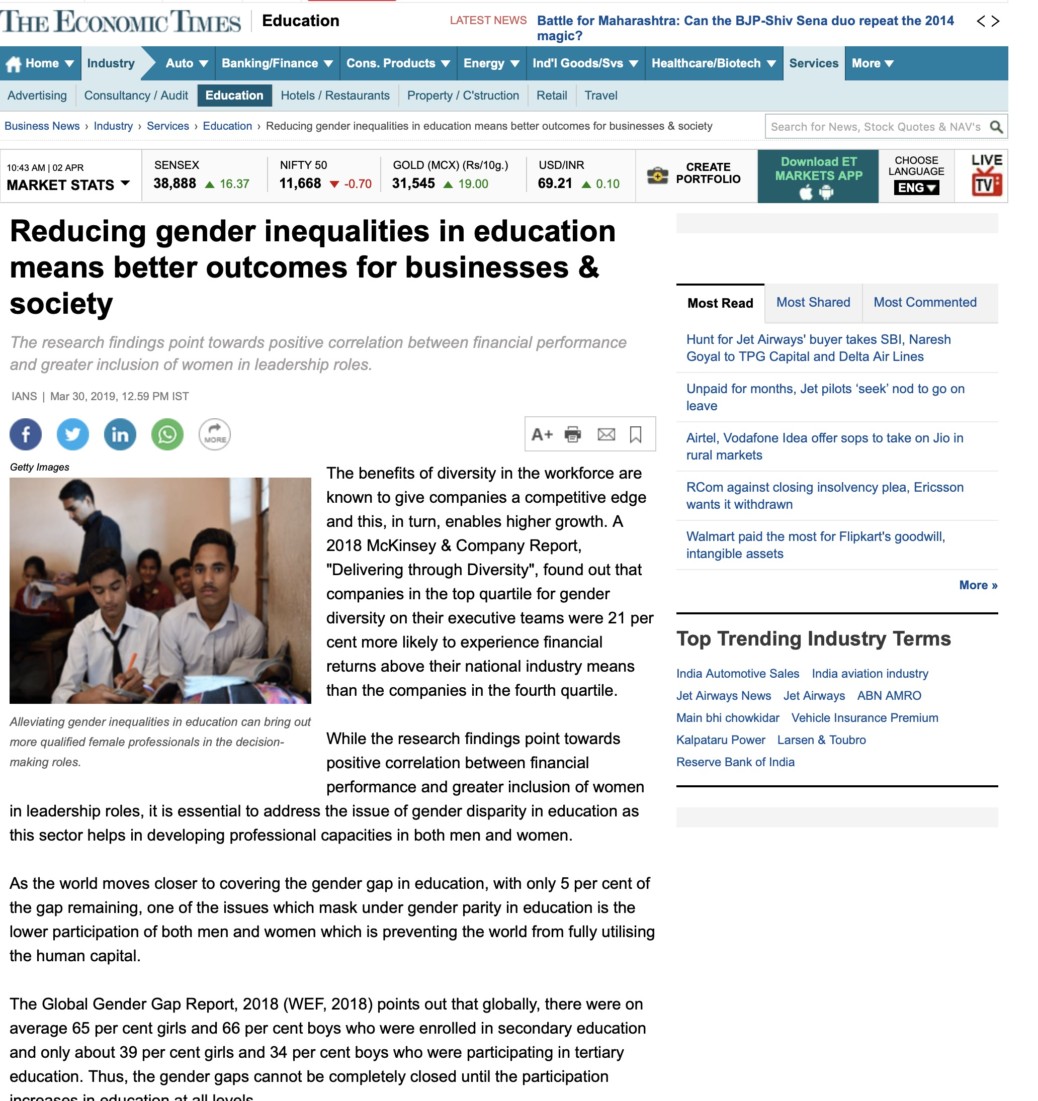 The benefits of diversity in the workforce are known to give companies a competitive edge and this, in turn, enables higher growth. A 2018 McKinsey & Company Report, “Delivering through Diversity”, found out that companies in the top quartile for gender diversity on their executive teams were 21 per cent more likely to experience financial returns above their national industry means than the companies in the fourth quartile.

While the research findings point towards positive correlation between financial performance and greater inclusion of women in leadership roles, it is essential to address the issue of gender disparity in education as this sector helps in developing professional capacities in both men and women.

As the world moves closer to covering the gender gap in education, with only 5 per cent of the gap remaining, one of the issues which mask under gender parity in education is the lower participation of both men and women which is preventing the world from fully utilising the human capital.

Further, to the issue of the lower overall participation, particularly in the tertiary sector, is the fact that although there are more females graduating than males globally, when it comes to the skills for the lucrative jobs, women tend to lag behind men.

According to the Global Education Monitoring Report Gender Review (UNESCO, 2018), in countries such as Chile, Ghana and Switzerland, women account for less than one-quarter of all STEM (Science, Technology, Engineering, Mathematics) degrees. Among the South Asian countries, India has about 42 per cent tertiary graduate females pursuing a STEM programme, which is much higher than many developed countries. The only few countries where the majority of STEM graduates are females are Algeria, Tunisia and Albania.

In the era of the 4th Industrial Revolution, when the in-demand skills in the job market include Artificial Intelligence (AI) and machine learning, these gender gaps in STEM studies, if left unchecked, will broaden gender disparities across the industries. Currently, there is a significant gender gap among the AI professionals, with only about 22 per cent of them being female and 78 per cent being male. Regional analysis across the globe reveals that the top three countries where AI talent is the most prominent are United States, India and Germany – along with a significant gender gap in AI skills biased against women (WEF, 2018).

Industry-level workforce data for the gender gap indicates that the top three sectors where the proportion of men is much greater than women are manufacturing, energy and mining sector and software and IT services. Out of these, the third sector employs about 40 per cent of the AI professionals in total workforce, with women accounting for just 7.4 per cent of the AI talent pool. The other two sectors have a very low percentage of AI-skilled workforce.

Another sector where the share of professionals possessing AI skills is high is education, accounting for about 19 per cent of the total workforce – of which women account for just one-third of the male talent pool. However, education is also one of the few sectors where the number of women working are greater than the men.

If the current trend of male domination in STEM disciplines at the college level or in acquiring emerging skills at the workplace continues unabated, it can lead to wider gender disparities across industries due to the rising demand for the AI skills, irrespective of being a traditionally male or a traditionally female oriented sector.

Efforts towards achieving gender parity in education beyond enrolments, to take account of equality in choosing skills which are a gateway to employment opportunities, will help in creating a gender-equal workforce in the future and greater financial gains.

Addressing the gender disparity issue in education not just results in financial improvements for businesses, and greater growth, but also helps in achieving better development outcomes.

For instance, in the health sector, there is a global shortage of 17.4 million healthcare workers, including 2.6 million doctors, 9 million nurses and midwives (WHO, 2016). While women form the majority of the sector’s workforce, they are primarily clustered in the lower-level positions, with senior positions being held by men.

Efforts to attract more males to nursing courses and elevating the status of care related work can help to break the feminisation of the nursing profession and address the shortage of workforce to some extent. For women to move up to senior positions amidst the rapidly digitising technology, efforts towards reskilling them can close the gender gaps in senior positions.

As for improvements on other fronts, the water and sanitation sector, for instance, faces a significant shortage of qualified professionals. While the importance of involving both men and women in management of water and sanitation facilities has for long been recognised globally, mostly men are still seen as the primary decision makers.

The article was published with Business Standard, Economic Times and Outlook India on March 30, 2019.