US plans to roll back the 2010 Dodd Frank Act, a fatal move towards deregulation

Home US plans to roll back the 2010 Dodd Frank Act, a fatal move towards deregulation 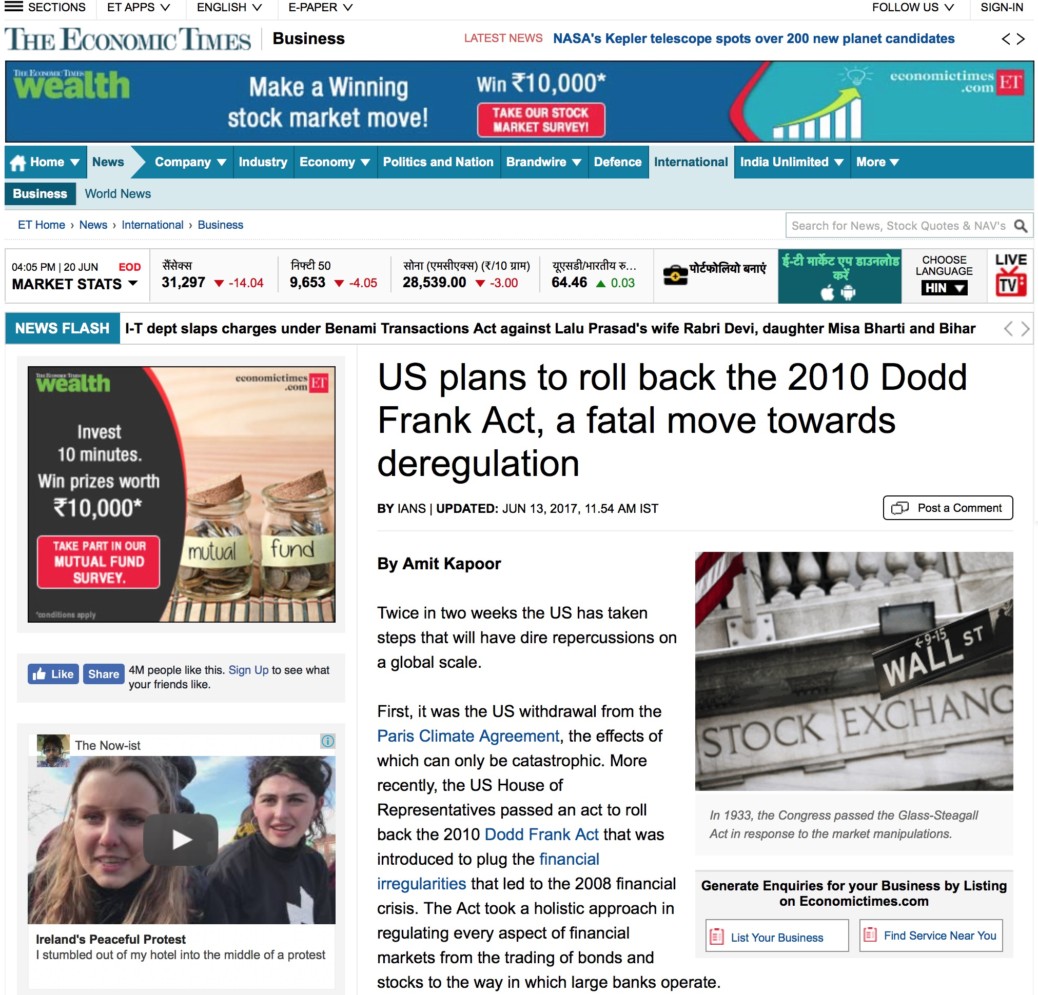 Twice in two weeks the US has taken steps that will have dire repercussions on a global scale. First, it was the withdrawal from the Paris Climate Agreement; the effects of which can only be catastrophic. More recently, the US House of Representatives passed an act to roll back the 2010 Dodd Frank Act that was introduced to plug the financial irregularities that led to the 2008 financial crisis. The Act took a holistic approach in regulating every aspect of financial markets from the trading of bonds and stocks to the way in which large banks operate.

The importance of regulation can be realised by gazing through a historical lens into the Great Depression of 1929. In the decade before the depression, the Unites States entered into a period of economic prosperity famously known as the Roaring Twenties. It was a time of rapid innovation, accelerated industrial growth and high consumer demand. Corporate profits skyrocketed and stock markets blossomed. Manipulation became rampant and even banks began offering securities backed by dubious assets. When the music stopped in 1929, the stock markets crashed, assets became worthless and households found themselves burdened with debt.

In 1933, the Congress passed the Glass-Steagall Act in response to the market manipulations. It effectively separated investment and commercial banking activities of banks. Banks were allowed only to take deposits and make loans while brokers were allowed only to underwrite and sell securities. This would prevent banks from taking too much risk with the depositor’s money by investing in the stock market. From 1933 until it was repealed in 1999, there were no instances of large bank failures or a crisis comparable to the one that occurred in 2008.

Regulation played a vital role in curbing economic miseries across the world. There is a lot of debate around the veracity of that statement and the importance of Glass-Steagall, but there is no second opinion on the fact that the act had prevented the formation of “too big to fail” organisations. Post-Glass-Steagall, the floodgates were opened for big ticket mergers like the one between J.P. Morgan and Chase Manhattan in 2000. Creation of such firms creates incentive problems as the stakeholders know that they will be bailed out in times of crisis. This was one of the major reasons of the financial crisis of 2008.

Dodd-Frank had three important aspects to prevent a repeat of 2008. First, was the creation of Consumer Financial Protection Bureau, which is a regulatory agency charged with overseeing financial products and services offered by firms. It protects consumers from misleading or fraudulent financial sales pitches and predatory mortgage lending.

The second major component of the Dodd-Frank Act is the Volcker Rule, which brings back the most crucial feature of Glass-Steagall of separating investment and commercial functions of banks. It restricts the way banks can invest, limits speculative trading and eliminates proprietary trading. The act also carried a provision to regulate derivates like credit default swaps that were the major contributors of the 2008 financial crisis.

The third is the establishment of the Orderly Liquidation Authority (OLA) that aimed to address the incentive issues with “too big to fail” institutions. The idea was that governments would seize institutions that it bails out so that it can keep them running without rewarding stockholders out of turn. In the 2008 crisis, it was unclear whether the Treasury Department had the legal authority to do so. The Dodd-Frank awarded that authority to OLA. Also, OLA is designed so that all costs are borne by private actors and not the taxpayers. It is limited to temporary funding of firms and does not hand out funds as permanent capital by having first claims on the firm’s assets.

The recent act passed by the House aims to eliminate all the positives of the Dodd-Frank Act citing that it harms business activities in the US. It restructures the Consumer Financial Protection Bureau by gutting its supervisory role and its ability to curb abusive financial practices. It also repeals the Volcker Rule, which would allow banks to reload on risks and does away with the Orderly Liquidation Authority that would make managing big banks difficult.

Thus, the act is a regressive move away from financial regulation that would have repercussions beyond US borders and into future generations. Hopefully, the act will not pass the Senate as it will not get all the 60 votes needed, but some provisions that need only Senate reconciliation, that is 51 votes to pass, might get through. Any such move that dilutes the Dodd-Frank will strengthen the chances of an avoidable economic crisis and force billions around the globe to relive the miseries that they have just endured. It is in the best interests of both Americans and economies around the world that the country’s legislators reconsider the act and move beyond narrow political aims.

The article was published with Economic Times on June 13, 2017