Learning from diversity in regulation

Home Learning from diversity in regulation 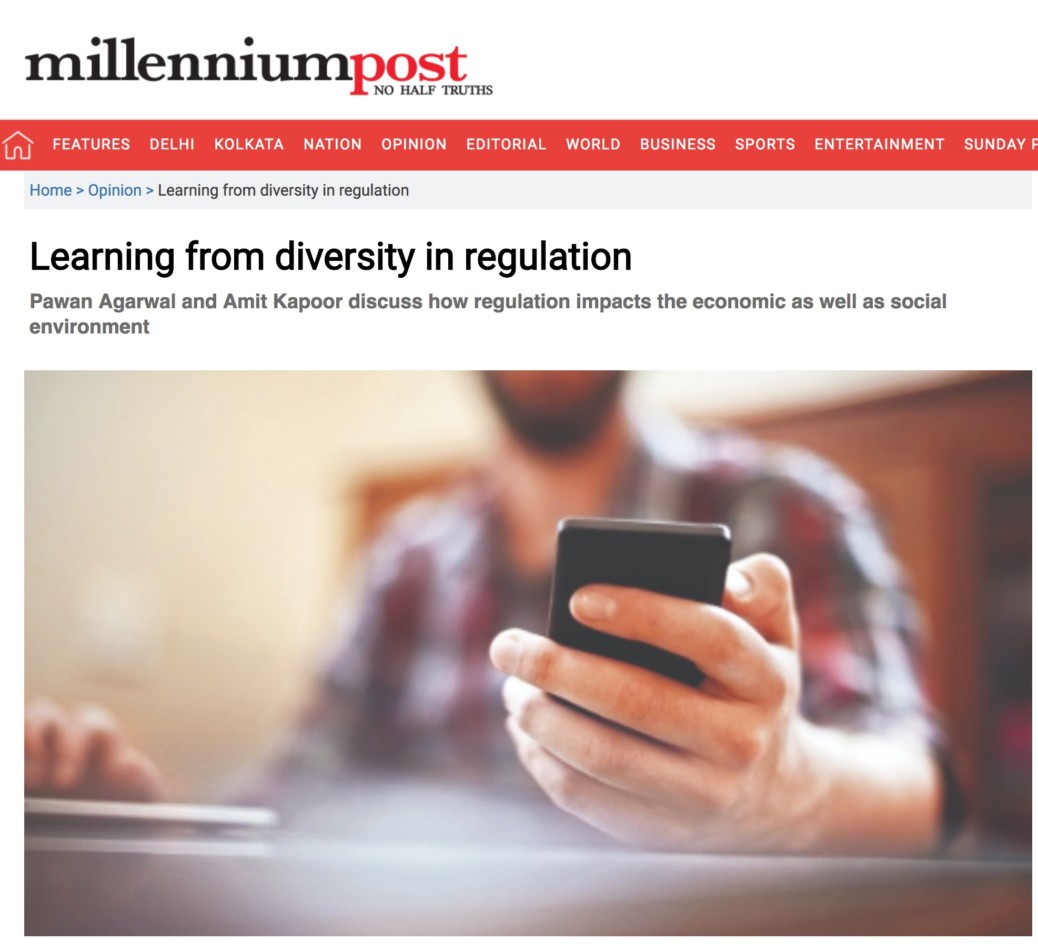 Learning from diversity in regulation

Regulation has an unfortunate, negative connotation to it. It brings to mind an authoritarian image with regards to the government. That is definitely not how it should be. It must be accepted that regulation has a great positive impact on society and the economy. The economic crisis of 2008, which was effectively a failure of regulation, forcefully underlines this fact. One needs to see regulation as an enabler, even for businesses, and not as a deterrent.

It is only natural for a citizen to have inhibitions about the regulatory environment. However, such concerns can be allayed if the government ensures that the key elements for an efficient regulatory body are present. An OECD document, “Principles for the Governance of Regulators”, explains that the key elements for “better” regulatory outcomes are: Well-designed rules and regulations that are efficient and effective; appropriate institutional frameworks and related governance arrangements; effective, consistent and fair operational processes and practices; and lastly, high quality and empowered institutional capacity and resources, especially in the leadership.

Given that India has a very peculiar regulatory environment, due to the lack of uniformity and presence of diversity in the structures and functionality of regulatory bodies, it is necessary to not only ensure that the aforementioned necessary conditions are met, but that the regulatory bodies adapt with the dynamic environment and learn from one another. India has multiple regulatory authorities, which have been set up due to three primary reasons. One is for welfare, wherein they have been set up in the public interest; two, to counter anti-competitive forces; and, lastly, to prevent any form of market failure.

India’s regulatory environment took flight only with the advent of the economic reforms of 1991, which implies that the regulatory bodies are at a very nascent stage. For instance, the Telecom Regulatory Authority of India (TRAI) recently completed 20 years; the Food Safety and Standards Authority of India (FSSAI) completed 10 years; while the Central Electricity Regulation Commission (CERC) has also been functioning for 20-odd years.

The tricky role of a regulator is to ensure the participation of the citizens, involve them in the process and enable them in the movement towards a better society and economy. The recent mammoth task taken up by FSSAI with its Eat Right Movement, which nudges the citizens and consumers to change their eating habits, is one example of how a regulatory body has been able to impact social and behavioural change that will culminate in a healthier nation and involves citizens.

It is not only about involving the citizens but also ensuring that they are be able to trust the regulatory bodies. As a case in point, TRAI has strengthened its administrative set-up for the purpose of internal audits. Similarly, the Directorate General of Civil Aviation (DGCA) now has an in-house transparency officer to cater to the same concern.

In a similar spirit of improved transparency, the regulatory bodies have adapted themselves to the ongoing increased reliance on technology and shifted to online portals and apps. This has not only made the processes and mechanisms smoother but has also reduced cumbersome paperwork.

For example, TRAI has whole host of online portals and apps, such as TRAI Analytics Portal and the Telecom Commercial Communications Customer Preference Portal. FSSAI has also incorporated facets of the online revolution within its system, wherein the licensing and registration of businesses can be done online via the Food Licensing and Registration Systems (FLRS) platform.

Finally, given that the regulatory environment is quite new, it is also crucial to continuously update policies and ensure laws are amended to be in sync with the changing economic and social environment. TRAI recently released a draft of the National Telecom Policy 2018. This is a step that every regulatory body needs to follow.

For India, the regulatory environment is growing, and newer, more innovative techniques are being adopted for the larger social good and to make the economy more competitive. For growth to be sustainable, all the regulatory bodies should learn from one another, adapt to the changing global environment and keep implementing innovative methods to counter issues as they arise. Most importantly, they must function as accountable, transparent and independent authorities.

The article was published with Business Standardand Millennium Post and Outlook India on September 25, 2018.