Mega trends and events to look out for in 2017

Home Mega trends and events to look out for in 2017 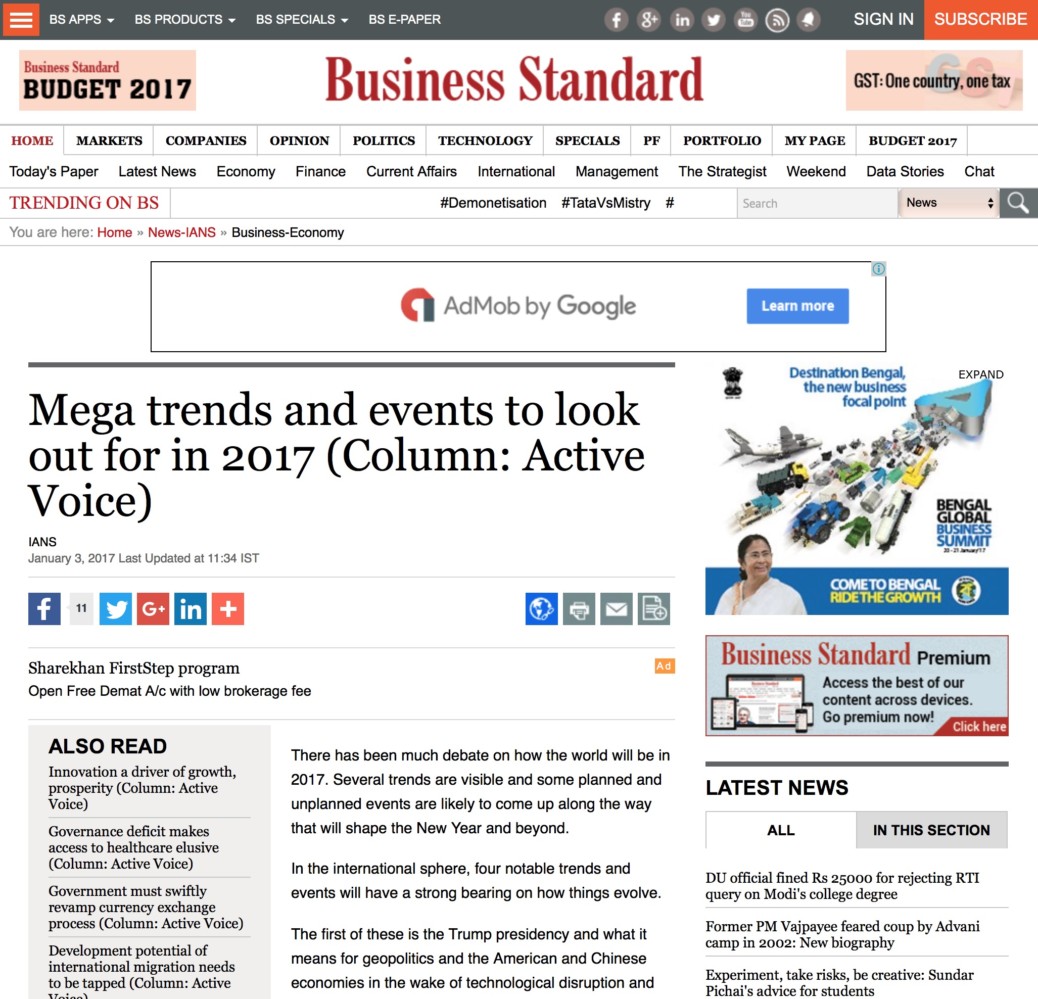 There has been much debate on how the world will be in 2017. Several trends are visible and some planned and unplanned events are likely to come up along the way that will shape the New Year and beyond.

In the international sphere, four notable trends and events will have a strong bearing on how things evolve.

The first of these is the Trump presidency and what it means for geopolitics and the American and Chinese economies in the wake of technological disruption and job losses. Donald Trump promises to be unpredictable and it will be interesting to see how his presidency shapes the world order. Already there are signs that he will have a greatly altered approach to the Middle East (evident from his statements on Israel and Iran).

His approach to Russia and China will bear watching. The US relationship with Russia is expected to alter significantly in the years to come. But most interesting will be the US relationship with China as Trump had promised in the run-up to the elections “to make America great again”. China is already seeing a replacement of manual manufacturing jobs with robots as the wage differential gets reduced between China and the West. The need and capability to reinvigorate American economy in the light of China’s manufacturing prowess will be another important feature of the Trump presidency.

Finally, the Federal Reserve, during the Trump presidency, is likely to see a tightening stance in 2017 which will have an impact on flows of portfolio investments away from emerging markets to the US.

The second is Brexit and the idea of Europe. The referendum in 2016 saw the crumbling of the idea of Europe as it is known today. How this shapes up will have considerable bearing on how other countries believe in the idea. France’s presidential election becomes important in this context, especially in terms of the rise of far right parties. Many countries and their leaders, right from the early 1950s, had invested significant social, political and economic capital to make Europe what it is today. Then came the idea of the monetary union in the 1990s.

Disruption of the sort witnessed after the Brexit referendum shows how difficult it is to understand and gauge popular sentiment. It is also being seen as a movement backwards from globalisation as migration and jobs become very important issues for the people.

The third important trend to watch out for is the movement of oil prices and their impact on oil producers and consumers. In the past few years, oil has been trading at historic low levels and the price of a barrel at one point dropped to $30 (bouncing back to roughly $60 now). In 2016, towards the end, OPEC and the non-OPEC members signed two separate deals which seek to limit production and thus increase the price of oil. Another meeting of OPEC members is scheduled in May.

The price of oil will be of interest to economies like India which are critically dependent on it for basic needs in production as well as mobility. It also has the potential to shift the geopolitical balance of power somewhat towards the resource-rich oil economies which have seen turmoil in the past.

Finally, it will be how the world order copes with the rising terror threats in not just the Middle East but in other parts of the globe — both developing and developed. The recent attack in Istanbul which left almost 40 people dead (of whom two were from India) is a grim reminder of the threat that the world order faces from terrorists. Requisite mechanisms will have to be built for tackling such situations.

Within India, there are significant events and trends that will shape 2017. The elections in Uttar Pradesh and Punjab are already the talk of the town. Already a lot is being witnessed in the run-up to the elections, including the Samajwadi Party power tussle. The outcome of the election will impact India’s political economy for some time to come.

The second important thing to look out for will be the Union budget in February. This will define how the National Democratic Alliance (NDA) government moves from here onwards. Demonetisation is expected to dampen consumer demand and the budget is most likely to see measures to address rural demand. Already Prime Minister Narendra Modi’s speech on New Year’s Eve mentioned some key measures that are expected to benefit the poor.

The budget is expected to be one that tries to reinvigorate rural demand, in addition to the continuing investments in the infrastructure sector.

The third important happening will be the shift in the timeline of the GST, most likely by a few months. Another thing unrelated to GST but related to the banking sector will be a cut in lending rates due to the additional cash within the banking system. Already SBI has cut lending rates by 0.9 percent.

In the wake of demonetisation the monetary policy will be again a thing to watch out for.

These events and trends in 2017 are expected to define how we live in 2017 and the years ahead.

Published with Business Standard on January 3, 2017.