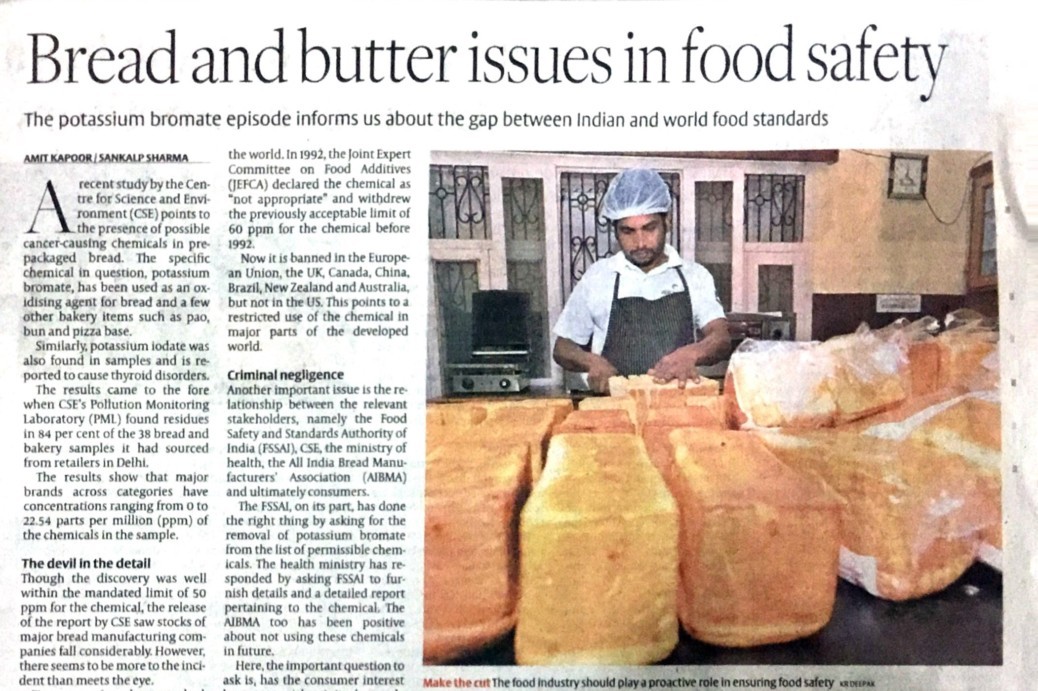 A recent study by CSE (Centre for Science and Environment) points to the presence of possible cancer-causing chemicals in the prepackaged breads. The specific chemical in question – Potassium Bromate has been used as an oxidising agent for breads and other bakery items like Pao, Bun and Pizza bread. Similarly, Potassium Iodate was also found in samples and is reported to be leading to thyroid disorders.

The results came to the fore when CSE’s Pollution Monitoring Laboratory (PML) found residues in 84 percent of the 38 bread and bakery samples it had sourced from retailers In Delhi. The results show that major brands across categories have concentrations ranging from 0 to 22.54 parts per million (ppm) of the chemicals in the sample. Though the discovery was well within the mandated limit of 50 ppm for the chemical, the release of the report by CSE saw stocks of major bread manufacturing companies fall considerably. However, there seems to be more to the incident that meets the eye.

Third, another important issue is the relationship between the relevant stakeholders namely FSSAI, CSE, Ministry of Health, The All India Bread Manufacturers’ Association (AIBMA) and ultimately consumers. The FSSAI on its part has done the right thing by asking for the removal of Potassium Bromate from the list of permissible chemicals. The Ministry of Health has also responded by asking FSSAI for furnishing details and a detailed report pertaining to the chemical. The AIBMA too has been positive about not using these chemicals in the first place in the future.

Ultimately an important question to ask is, has the consumer interest been put to risk or is it adequately protected? Well at present it seems various bodies have done their jobs properly, and there appears to be no reason for panic. However, it does point to an archaic standards regime that India continues to follow. The chemical ideally should have been restricted in the first place and even if it had regulatory clearance, they should not have been used by industry especially after international agencies in 1992 had termed it ‘non-appropriate’. The industry was well aware of the fact and continued its usage on the ploy that it was being allowed as per the national standards under PFA earlier and FSSAI now. The flour milling and bakery industry continued to look at the Indian standards to continue its usage even though options were available to the industry for achieving the desired functional requirements.

It also raises the question of the present efficacy of the regulator and its regulations. The issue also raises concerns as to why has the regulator – Food Safety and Standards Association of India (FSSAI), which came into being after an Act of Parliament in 2006, and operationalized in 2011 had not looked into the matter earlier? The problem seems to be that regulation has been late to catch up with scientific research and developments in the market behaviour and outcomes. Being a young regulator, it seems FSSAI is taking some time to get its standards completely harmonised with international standards. It is where there is immense scope for civil society to play a proactive role in pointing out the inadequacies in standards. However, this needs to be done in a consultative manner and with a positive approach rather than with scaremongering and publicity  that can ultimately harm rather than taking into account consumer welfare which they purport to promote .

In the future as the regulatory framework for food standards deepens within India the need is to harmonise the standards further as well as ensure consumer interest is looked upon as the primary concern of the regulator. The regulator has done the right thing by ordering a removal of Potassium Bromate from the list of permissible chemicals used for manufacturing bread. It is good that AIBMA too has on its own decided to discontinue use of potassium bromate in bread making. The industry should play a more proactive role in the area of food safety, nutrition and good manufacturing practices.  However, in the long run, the need is to systematise the process of harmonising food safety regulations and standards with international norms and ultimately protect consumer interest by providing a safe and nutritious food and ensure good health.

Published in Hindu Business Line on June 3, 2016. To know more