By the Ganges: The Death of Development in Uttar Pradesh and Bihar

Home By the Ganges: The Death of Development in Uttar Pradesh and Bihar 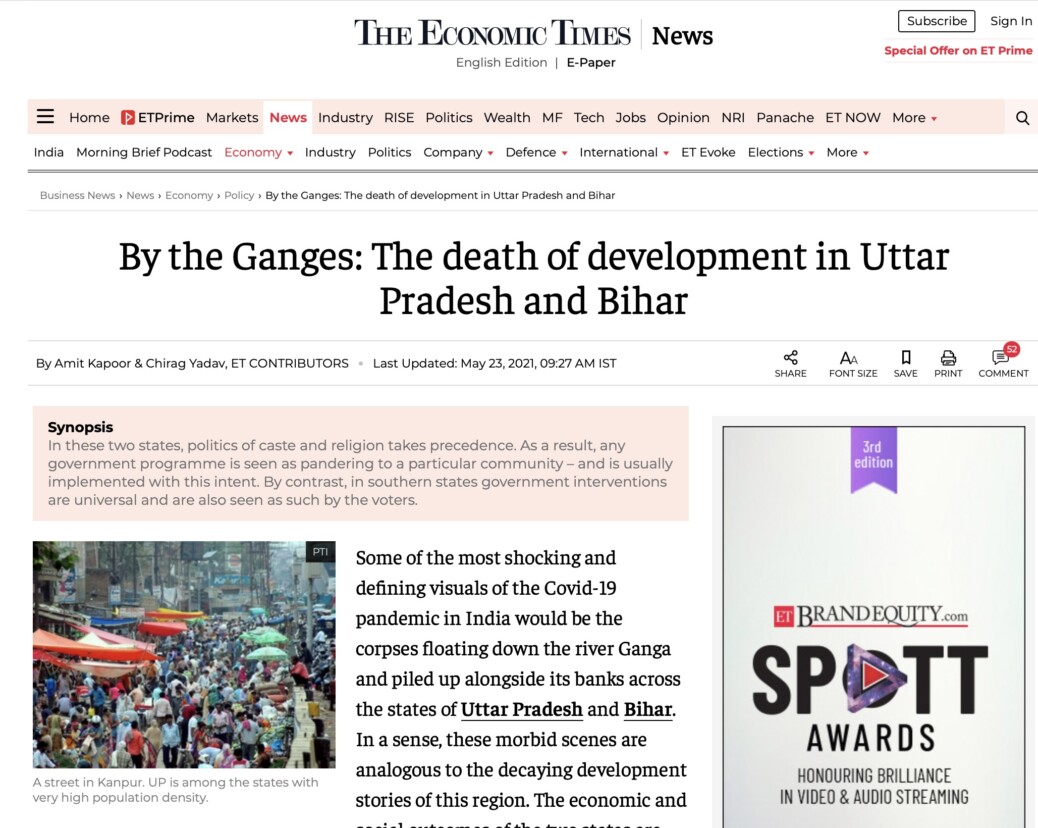 By the Ganges: The Death of Development in Uttar Pradesh and Bihar

Some of the most shocking and defining visuals of the COVID-19 pandemic in India would be the corpses floating down the river Ganga and piled up alongside its banks across the states of Uttar Pradesh and Bihar. In a sense, these morbid scenes are analogous to the decaying development stories of this region. The economic and social outcomes of the two states are comparable or even worse than sub-Saharan African nations – the least developed part of the world.

Since the two states comprise over one-fourth of the Indian population, the development outcomes of this region define the nation’s overall development. They also have the youngest population among Indian states with a mean age of 20 years as per the 2011 Census, which implies that their population growth is the highest. While Uttar Pradesh is India’s most populous state, Bihar is expected to overtake Maharashtra as the second-most populous within the next three years. In fact, if the two states were a country, it is expected that by 2036 they would have the third-highest population in the world. So, the progress of these states and its people hold the key to India’s future.

However, progress has been dismal since decades now. It was the 1980s when Ashish Bose, the demographer, coined the infamous “BIMARU” acronym to highlight the concerning health scenario in the states of Bihar and Uttar Pradesh along with Madhya Pradesh and Rajasthan. In economic terms, Bihar was the poorest state in terms of per capita income in 1980 and Uttar Pradesh was the fourth poorest. By 2020, Bihar has remained the poorest while Uttar Pradesh has fallen to the second place. So, in fact, the outcomes have worsened with time in relative terms.

Why has development eluded this region so completely? To be fair, there are certain natural limitation. First, both states are entirely land-locked with no direct access to seaports. This implies that the opportunities for earning through international trade are relatively limited compared to states with a coastline. Second, Uttar Pradesh and Bihar have immensely high population of 828 and 1102 people per square kilometre, respectively. The average population density for rest of India stands at 307.

However, both of these natural drawbacks can be countered. While it is true that economies without access to ports can experience problems of growth, the case of Punjab and Haryana have shown that it is not impossible with the right set of policy choices. Regarding population density, Kerala, which has social outcomes at par with the developed world, has 859 people per square kilometre.

Moving beyond natural causes, the most evident inhibitors of growth and development for these states are its institutions. The elections in these states are hardly fought on the agenda of development. So, political institutions are not driven to invest in key areas such as health and education. Further, the business environment in the two states is unable to attract investment due to poor infrastructure, problems of law and order, and prevalence of corruption.

All of these issues are well-documented and discussed for these states. Additionally, an interesting aspect of the difference in development trajectories of states in the north and south is the issue of identity. States in southern India like Kerala and Tamil Nadu have a strong sense of collective identity within their state boundaries, which encourages them to demand focus on development of the state. These state populations are also divided along caste and religious lines like the rest of India, but it is often superseded by a common linguistic identity.

Uttar Pradesh and Bihar have lacked this sense of – what Prerna Singh in How Solidarity Works calls – “subnationalism”. The absence of a common linguistic identity prevents the required social cohesion to demand investment in economic and social development. Instead, politics of caste and religion takes precedence. As a result, any government programme is seen as pandering to a particular community – and is usually implemented with this intent. By contrast, in southern states government interventions are universal and are also seen as such by the voters.

The shock of the COVID-19 pandemic cutting across caste and religious lines should help voters recognise the collective benefit of investing in human development. But the corpse of underdevelopment along the banks of the Ganges can only by disposed off when they vote for their future rather than their communities.

The article was published with Economic Times on May 23, 2021.