Location’s the name of the game

Home Location’s the name of the game 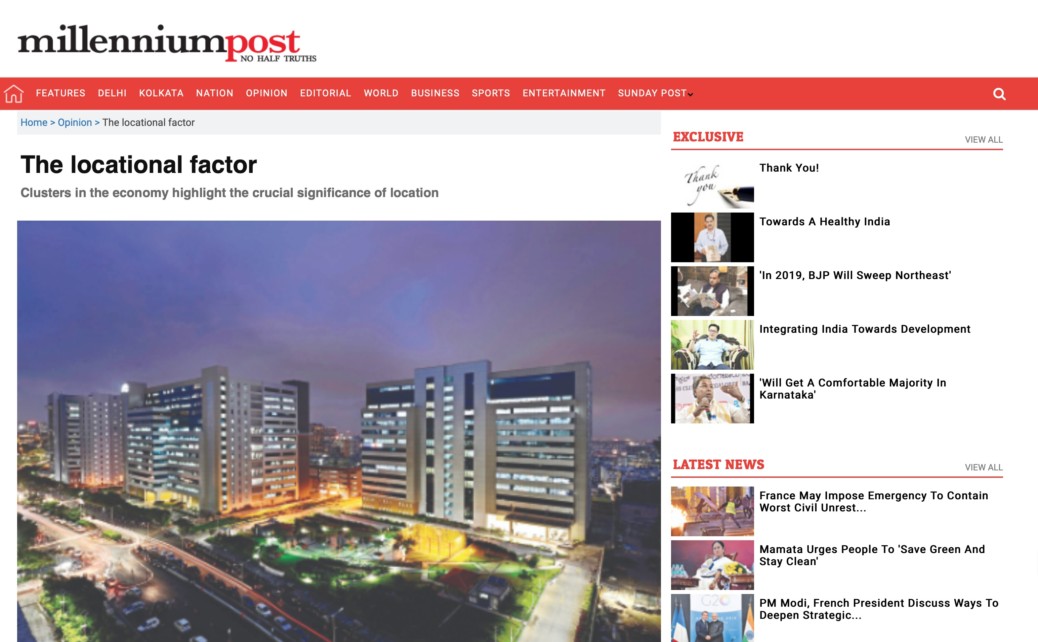 Location’s the name of the game

In this globalised world, there are many voices cheerleading the belief that location holds no relevance in competition. This view, that globalisation, escalated by advances in technology, has created a borderless world is based on two phenomena — tradability and codification.
Due to tradability, many service sector jobs that were once considered to be geo-specific became less dependent on the places where the service is consumed and moved to low-cost locations instead. On the other hand, due to codification, knowledge can be transferred over long distances and across organisational boundaries at low cost. Based on these ideas, scholars announced the “death of geography”.

But despite the twin processes of globalisation and digitalisation, the world, whether developed or developing, is still home to geographic concentrations of inter-connected companies, or clusters, to be specific. The importance of location can be seen in the famed growth stories of IT hubs like Silicon Valley and Bengaluru that are still going strong.

This lands us in a paradoxical situation. If the dominant view is that location hardly matters anymore, then why is the probability of finding a world-class mutual fund company in Boston higher than any other place? Why could the same be said about the movie marketing and production companies in Mumbai, the automotive companies in south Germany, and the pharmaceutical companies in Andhra Pradesh? Clearly, companies derive certain benefits from moving into particular regions and coming into the presence of clusters.

The answer lies in the fact that the traditional reasons for clustering have diminished in importance with globalisation as they were based on the cost-minimisation view of competition. In this view, competition is driven by the cost of factors such as land, labour, and capital, which have become less fundamental in setting companies apart after the world globalised.
However, this does not imply that the role of location is diminishing. It just means that the primary factor that was attracting companies to a particular location has shifted from the size and cost of factor endowments to their productivity and productivity growth.

Firms can be productive in any industry if they employ sophisticated methods, use advanced technology and offer unique products and services. And the geographical concentration of firms positively impacts their innovative capacity. This happens because cluster participation eases the process of learning and innovation as firms try to create a shared understanding of the industry and its workings. Every firm within the cluster benefits from an idea or innovation and thus the productive benefits are realised on a larger scale.

To understand this in the Indian context, the Institute for Competitiveness conducted a study on clusters. It identifies the clusters that are present in the economy and analyses the change in their performance in the last 15 years. The study provides some interesting insights that can help policymakers make informed decisions about enhancing regional competitiveness.

First, Indian States display widespread contrasts in terms of their average wages, wage growth, employment growth and cluster strength. The average wage of the highest-earning State (Jharkhand) is nine times that of the poorest one (Tripura). It is surprising that the average wages in industrial States like Tamil Nadu (Rs 1,73,000) and Andhra Pradesh (Rs 1,48,181) fall below the national average (Rs 1,76,677). The employment and wage scenario in these States reveals that even though they are known for some high-paying sectors (automobiles in Tamil Nadu and pharmaceuticals in Andhra Pradesh), most of the workers are employed in low-paying sectors like food processing and textile manufacturing.

A clear geographical distinction is also observed in the results of cluster assessment: The southern region has a stronger cluster profile than the rest of the country. The results reveal the benefits of decentralised economic policy and how national policy is necessary but not always sufficient. This evidence is conclusive enough to say that no single policy will work for all regions. India has a long way to climb up the developmental ladder — and the States seem to be its best bet.

Second, there is a lot of evidence to suggest that clusters provide an environment conducive to innovation and knowledge creation. They allow easy flow of ideas and create opportunities for innovation. Competitiveness of the overall economy is affected through these innovations, based on the potential advantages for firms, along with the flexibility and capacity to act on them.

This trend is also observed in India. Regions that have a strong cluster portfolio also perform better on innovation. The correlation between cluster strength and innovation at the State level is 0.52. A positive relationship is observed between regional competitiveness and economic development as well as cluster strength and economic development.

This justifies the theory that clusters enhance innovation and productivity of regions, ultimately improving the standard of living of citizens. This suggests that policymakers should focus on cluster policy for economic development.

Third, it has also been observed that the overall impact of the high-tech clusters on the regional economy is very small. The proportion of high-tech employment explains 6 per cent of the variation in average wages and 7.6 per cent of the variation in average wages of local clusters. This helps us conclude that rather than merely focusing on high-tech clusters, regions should focus on supporting the established clusters. The focus of the government should be on upgrading the already established and emerging clusters rather than seeding new ones.
Clusters present a new way of thinking about economies, both national and local, and they define new roles for the government, businesses and other changemakers in enhancing competitiveness.

Policymakers should play the role of enablers by focusing on the overall environment rather than on specific firms. Sometimes, governments use policy instruments such as subsidies and grants to develop clusters and enhance the competitiveness of certain industries. These approaches do not align with modern competition. The correct approach is to identify the strengths of every region and then focus on providing the right environment that will enhance productivity. IANS