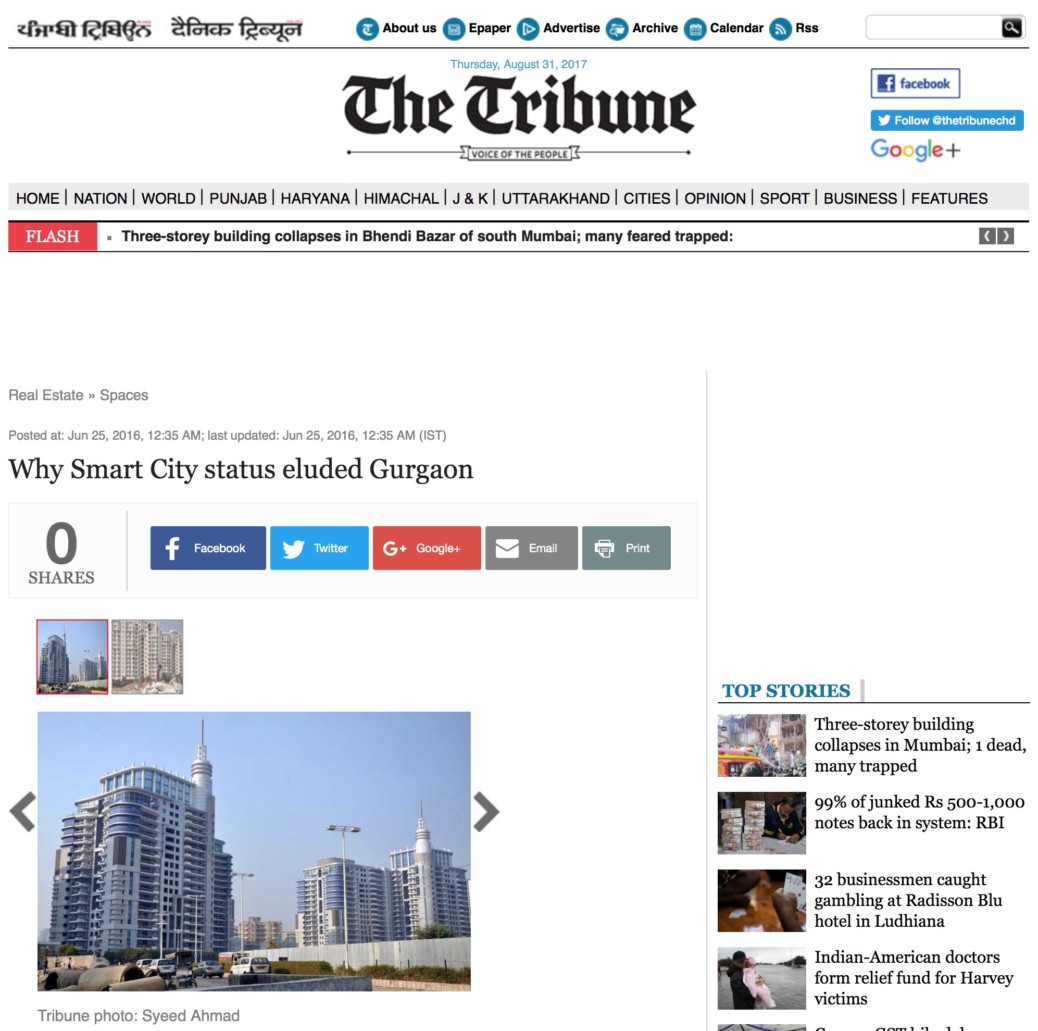 Dr. Amit Kapoor shared his views on the city of Gurgaon in an article titled “Why Smart City status eluded Gurgaon” published with The Tribune, Chandigarh on June 25, 2016.

That Gurgaon, the numero uno city of Haryana and NCR, has been denied the place of honour even in the second list of smart cities released by the Union Urban Development Ministry has not come as a surprise to many. Gurgaon’s non-inclusion is, however, an embarrassment to the Haryana Government which globally presents it as a ‘show window’ of Haryana. It was to overcome this ’embarrassment ‘that the Haryana Chief Minister, Manohar Lal Khattar, had to declare that the state government will develop Gurgaon on its own as a ‘Super Smart City’, a cut above the Smart City.

The years of apathy, mismanagement and haphazard unplanned development has cost the city dearly. The infrastructure mess, deficient civic amenities and poor governance have all added up to rob Gurgaon of its place of pride in the smart cities’ list. Gurgaon fails to meet many city-ranking parameters for its selection as Smart City. In India City Competitiveness Index, it ranks very low in terms of infrastructure development, cost of doing business, competitive intensity and quality of life despite scoring quite high on the parameters of business environment, education and knowledge creation, supporting industries and institutions. Urban planners say that lack of power and drinking water, poor sewerage and drainage system, mobility bottlenecks, have all proved a bane for Gurgaon. The administration needs to tackle these problems before it can justifiably stake its claim to be a Smart City.

Ramesh Menon, director, Certes Realty, says that the denial of Smart City status to Gurgaon is on expected lines as the city lacks ‘Infra First’ approach, which has to be the mantra for a smart city. “How can a city become smart without proper infrastructure?” he asks.

According to S.P. Gupta, former Administrator, Haryana Urban Development Authority, Gurgaon, and Director General, Haryana Institute of Public Administration, “Gurgaon has a flawed model of development. The external development should be done first before residential or commercial real estate development takes place in the city. But unfortunately it is the other way round. Dwarka E-way is a classic example where residential development has taken place and even people have started living there but there is no connectivity, water and sewerage facility.”

R.S. Rathee, president, Gurgaon Citizen Council and president, DLF residents welfare association (RWA), is of the opinion that Gurgaon has been denied the Smart City tag due to its flawed development. “There is no public transport worth the name. There are encroachments all over. There is no primary health facility. Deficient power and drinking water facilities and lack of drainage add to the woes of residents who have become pawns in hands of both the civic authorities and private builders,” he says. Rathee also raises the issue of governance. “There is a big question mark over the working or rather efficiency of Municipal Corporation, Gurgaon (MCG). Even after elevating city’s Municipal Council to Municipal Corporation, it is still working like a committee. The entire builder licenced area of 8,000 acres is still not under the MCG and even old HUDA sectors are not under it as yet.” S.P Gupta says that it was a big blunder on part of the previous government to upgrade the Municipal Committee into a Municipal Corporation without any proper feasibility study. “Instead of the Municipal Corporation, they should have set up the Gurgaon Development Authority. A proper report was not prepared to stake Gurgaon’s claim to Smart City, otherwise more than Karnal or any other city of Haryana, Gurgaon deserves the Smart City status,” says Gupta.Gurgaon has an inherent advantage of its proximity to Delhi and an international airport. But city’s over dependence on the NH8 and Mehrauli-Gurgaon Road for connectivity with Delhi and its failure to develop alternate connecting roads with Delhi, has resulted in traffic bottlenecks. Crucial E-way projects like Dwarka E-way and Kundli-Manesar-Palwal (KMP) E-way, which could have helped in easing traffic burden on city roads, have missed many deadlines. What has further precipitated the matters is illegal parking due to the lack of planned multi-storeyed parking lots. Two key development projects — a full-fledged city bus service and metro rail extension, which can go a long way for its better development, have been mired in red-tape for years though the new government has shown interest in expediting these projects. Currently, the city has a skeleton local bus service. Even the metro rail network in the city is quite inadequate — it is half of what’s there in Noida.

Moreover, it serves only New Gurgaon, while the old city remains without connectivity. The plan to connect old city with metro rail through Sector 21, Dwarka, has been hanging fire since 2012. What’s more, the last-mile connectivity leaves much to be desired. Dr Amit Kapoor says, “Gurgaon lacks integrated development. It is a badly designed city. Can you think of a prime commercial hub like Cyber City in the midst of residential area? Even the NH8 is badly designed with no proper exits. Gurgaon is a case of imbalanced development with a wide gap in development between Old Gurgaon and New Gurgaon. In fact, Gurgaon is an Infra Amusement Park – a perfect example of how not to develop a city. If it goes like this, Gurgaon will soon turn into a dead city,” warns Kapoor.

Urban planners say that public utility projects like city bus service and metro extension should be undertaken on a top priority for the smart development of the city. But what is happening is that while metro rail extension and city bus projects are going ahead at a slow pace, road and flyover projects like 16-lane E-way from Delhi-Gurgaon-NH border to Sector 55/56, along the Golf Course Road, are being developed on priority.

Today, there are 115 sectors in Gurgaon under Gurgaon-Manesar Development Plan. Out of these, 57 sectors have been developed by HUDA and the rest (Sector 58-115) have been given to private builders. The residents of new sectors, besides facing problems of power and water, badly lack transportation facility due to which people working in Delhi and Gurgaon find commuting very difficult, especially when private transport is also not easy to get. Problems of all those living in sectors beyond Kherki Daula Toll Plaza, gets further compounded due to massive traffic jams. Says Navin Raheja, CMD, Raheja Developers, “There are many projects on Dwarka E-way which are built but rendered useless due to lack of associated infrastructure. And this infrastructure deficit is having adverse impact on property prices and rentals”.

The issue of funds crunch and diversion of funds has been cropping up time and again with regard to Gurgaon’s tardy development. Even Rao Narbir Singh, Public Works Department & Forests Minister, Haryana, has gone on record saying that Gurgaon generates highest revenue in the state yet it gets lowest funds for its development.

The massive fund shortage for infrastructure development has been highlighted in a recent report prepared by Divisional Commissioner, which points out that this year the state’s infra budget of Rs 3,541 crore is 10 times short of total fund requirement of Rs 32,000 crore. This has badly impacted Gurgaon’s budget. The Haryana Government’s budget crunch has a lot to do with unrealised dues and VAT of Rs 24,000 crore for private developers, as revealed in a RTI reply. This problem has been further compounded by HUDA, once a cash cow, going bankrupt. The major reason for this is high outgo for enhanced compensation for land acquisition. Rao Narbir Singh has gone on record saying that while the previous government did nothing for infrastructure development and EDC/IDC were not put to use, and now it is a challenge for HUDA which is short of funds. Due to HUDA’s financial crisis, development works in Gurgaon, which require Rs 23000 crore, have been badly hit. To tide over the financial crisis, HUDA has been mooting the idea of mortgaging its land bank. The development agency is also thinking of floating new sectors to raise additional Rs 6,000 crore and sell its unallotted plots in developed sectors.

It is not just the funds, the governance also holds key to city’s development. There are many votaries of Single Development Agency like the Delhi Development Authority to ensure planned and balanced development. Such a unified body is necessary for city’s planned and balanced development.”For a smart city, you need a unified development agency which is lacking in Gurgaon. On the contrary, multiplicity of authorities is working against it,” says Rathee endorsing Menon. Though this demand for a unified authority has not been addressed for years, the recent assurance by Haryana Chief Minister, to constitute the Gurgaon Development Authority by bringing the Bill in the state Assembly after addressing the objections raised by the Supreme Court, has raised hopes for development of Gurgaon as a smart city.